But I Still Get Spam! How Did They Get My Address?

Sometimes, you take all the spam precautions in the world, but somehow you STILL end up getting spam. Here’s how this can happen:

Say, you regularly exchange emails with your college friend John. John uses Outlook, Thunderbird, Apple Mail or a similar desktop software and has dozens of emails from you in his inbox. He even added you to his address book. He also has lots of emails from and to former classmate Jane. You haven’t stayed in touch with Jane that closely over the years but you definitely know who she is.

Last year, just before the holiday season, John downloaded and installed this really pretty Christmas screensaver that showed tranquil tree and candle scenes when he wasn’t using the computer. What he didn’t know was that the screen saver had a sinister hidden payload. While the candles flickered peacefully on his screen, the software went to work combing through his emails and address book, his browser’s cache of past webmail sessions and other files, storing every email address it would find in a separate list.

Then it sent the entire list to a server in Russia, where some shady character combined it with other such submissions to build the ultimate monster spam list that can be sold and resold over and over again.

But as if that wasn’t enough, when the “screensaver” sent the address list to Russia, it received some content in return – messages to be blasted to all of John’s contacts. Then, unbeknownst to John, his computer started creating hundreds of emails randomly using the harvested email addresses in the To: and From: field along with the content from the Russian server and sent them out using John’s Internet connection. One of them used Jane’s email address as sender and yours as recipient.

Now you received some spam from Jane asking you to buy fake watches and you’re ready to fire an angry response to her telling her to stop. Well, don’t. Jane has obviously nothing to do with the whole thing and you’ll never find out that it was actually John’s computer.

You just had a look into the really nasty underbelly of the Internet where botmasters (the guy in Russia) control bot nets (infected computers that all report to the same server) of remote-controlled zombies (John’s computer) that were compromised using trojan horses (the screensaver) or similar malware.

And it doesn’t even end there. The botmaster typically doesn’t spam for his own account but whores out his bot net to whoever pays the most. The equally shady factory in China wanting to sell more fake Rolexes can now hire the botmaster to blast their offers all over the internet. The guy in Russia doesn’t even care if you open or click on that email from “Jane”, he gets paid either way. And when he’s done with the watches, he’ll inform his entire mailing list that they all won the lottery and can pick up the prize if only they pay a small “transfer fee” up front. And after that, he’ll mail a Paypal phish for yet another “client”. And for good measure, he’ll sell his entire email address database, incl. yours, to a friend who is in the same line of “business”.

In other words, once your email address got picked up by a bot net, pandora’s box is wide open. The whole scheme is particularly wicked because now you have to depend on others to keep your address safe. Unfortunately, there is little you can do: 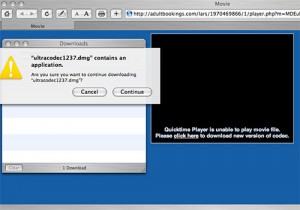 A trojan that targets Macs pretends to be a QuickTime codec, but instead installs malware. Credit Wired.com

Other than that: Keep a good spam filter!